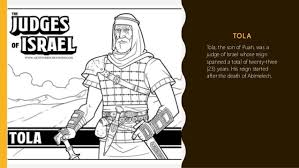 Bible Reference: Judges 10:1-2 The Bible record about this minor Israelite judge is: “A man from the tribe of Issachar, Puah’s son Tola, grandson of Dodo, arose to save Israel. He lived in Shamir, in the mountainous region of Ephraim. He governed Israel for 23 years and then died. He was buried in Shamir” Judges 10:1-2.

Heart of Story: From the tribe of Issachar, Tola was the 6th judge in the Promised Land. He is considered a minor judge because little is recorded about his life.

Back Story: Tola was Puah’s son and the grandson of Dodo. Tola was from the tribe of Issachar but lived in the tribal lands of Ephraim. The hill country of Ephraim is in the eastern portion of Ephraim’s assigned land.

Issachar and Ephraim were not adjacent tribal lands; West Manasseh tribe was located between Issachar Ephraim. Because Tola was buried at Shamir, Ephraim that likely was his hometown.

Ephraim and West Manasseh were adjacent tribal lands. Israelites in Tola’s sphere of influence (what tribes) were worshiping Gideon’s ephod at Orphah, West Manasseh. Worship of the ephod was similar to worship of the golden calf in the Sinai Wilderness. It was idolatry because it was a substitute for God worship.

Tola’s name and his father’s name, suggested that his family was one that remembered their ancestry. Issachar, the son of Jacob and Leah, had four sons. Both Tola and his father (Puah) were named after Issachar’s sons despite as much as an 800 year time lapse between Issachar and Tola’s birth.

Story Line: Tola was judge over Israelites for 23 years; the timeframe was approximately 1149 to 1129 BC.  We don’t know how he became a judge. Tola seems to have been raised to the position of Judge by God. At the same time, there is no documentation that God’s Spirit came on him to accomplish his role as it did with Judge Othniel.

Apparently Tola did what God asked him to do. He judged in God’s wisdom and created peace in the promised land; consequently, so there was no need to record anything about the events of Tola’s life.

Pondering Relationships: Prior to the Bible record that Tola became judge, no specific national enemies, i.e.,  Moabites, Mesopotamians, Canaanite kings were named. Perhaps, Tola governed more in the judicial sense than with military might. Perhaps like Deborah, Tola offered judicial rulings from one location as Deborah offered them under the Palm of Deborah. Alternatively, he may have moved from location to location as we see with Samuel.

The Bible recorded that Tola “saved” Israelites. In similar situations where “saved” is used in Judges, the Hebrew word yâsha’ is used and translated: to free, avenge, defend, deliver, get victory. Possibly, Israelites had an enemy during Tola’s time as judge, given the Hebrew word for “save” used in the Judges 10:1. Because the national enemy was not named does not preclude one. Importantly, the judge Tola acted as God required.

The Israelite judge Tola acted in the way God directed. He fulfilled his role without drama, i.e., reluctant to act as judge or subsequently turning the land to idolatry.

Reflection: Ponder or discuss why no Israelites enemy is named. Why is there such a dearth of information about Tola?

Please visit my website for books on lesser known Bible characters: www.CarolynRothMinistry.com  Specifically, you may want to order Restoring Relationships which is an expanded version of my original book titled Lesser Known Bible Characters.