Heart of Story: When the angel, Gabriel, announced the birth of a son to Zechariah, Zechariah didn’t believe him. Consequently, Zechariah was mute the entire time that his wife Elizabeth was pregnant.

Back Story: Zechariah was born and lived in the Judean Mountains. Although some websites averred that his birthplace and home was Hebron, the Bible is silent on this topic. Zechariah was a priest in the line of Aaron. Both he and his wife, Elizabeth, was from the tribe of Levi. The Bible recorded that both Zechariah and Elizabeth were very old (not just old but very old) when Elizabeth became pregnant.

Story Line: From the clan of Abijah (a descendant of of Aaron,) Zechariah left his home in the Judean mountains and traveled to Jerusalem. Twice a year, priests were required to serve a week in the Temple. Zechariah was chosen by lot to offer morning incense in the Temple Holy Place.  As Zechariah prayed, the Gabriel, an angel,  appeared to Zechariah. This incident is the first time (chronologically) that an angel appears to anyone in the New Testament.

Gabriel told Zechariah that God was going to answer his prayer for a son. Further, Gabriel told Zechariah that his son would be a great man. The son would announce the coming of the Messiah and lead many to the Lord. Apparently, Zechariah doesn’t believe Gabriel’s message.  Zechariah asks how he can be sure that such an outlandish promise will come to pass. Gabriel’s response showed that he didn’t appreciate Zechariah’s doubts. He replied that he, Gabriel, stands in the presence of God and that because of his doubt, Zechariah will be mute until the birth of his son.

Zechariah returns home and Elizabeth become pregnant. During the nine months of her pregnancy, Zechariah cannot speak. At Zechariah and Elizabeth’s son’s birth, they name the boy John even though that wasn’t a family name. 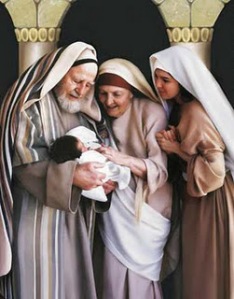 Pondering Relationships: Both Mary (the mother of Jesus) and Zechariah are surprised when the angel announces that they will have a son. Yet, Zechariah’s response wasn’t honest inquiry (as was Mary’s) but disbelieve and possibly derision.  Gabriel punishes Zechariah with muteness. Possibly, there was more to Zechariah’s comments or his thoughts in response to Gabriel’s announcement than Luke, the gospel writer, shared. Alternatively, Gabriel responded to Zechariah’s thoughts and/or tone of voice.

Sometimes family disappointment causes a husband and wife to separate physically and psychologically. This did not occur in Zechariah and Elizabeth’s marriage. Their barren state seems to draw them closer. Can you imagine the couple’s joy when Elizabeth becomes  pregnant? When Zechariah returned home from Jerusalem, he could not speak. Possibly Zecharia was unable to explain his vision to Elizabeth. Remember in ancient Judea, women were uneducated. Zechariah could not even write Elizabeth a note about his encounter with Gabriel and the angel’s promise.

Possibly, neither Zechariah nor Elizabeth believed she was pregnant initially.  When  reality hit, Zechariah could have pantomimed “I told you so” to Elizabeth.

John’s ministry began when he was about 30 years of age. Likely, Zechariah didn’t live to see his son prepare the way for Jesus; however, God revealed to Zechariah what his miraculous son would do.

Reflection: Do you think that Zechariah knew that there was no man born of woman that was greater than his son?