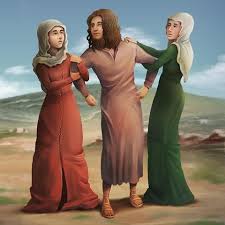 Heart of the Story: Lamech’s heart was malicious  and he killed a man. His wife’s name was Zillah.

Back Story: In Genesis chapter four, we read about the offspring of Cain. The chapter provides a contrast to chapter five in which the offspring of Seth is outlined. In the offspring of Cain, Lamech, a seventh-generation grandson of Adam, had two wives simultaneously.  This is the first time that plural wives were identified in the Bible.  Lamech’s second wife was named Zillah. One source identified that Zillah was a third cousin of Lamech. Zillah birthed at least two children: Tubal-Cain, who forged tools from bronze and iron, and a daughter named Naamah. Below is a photograph of the plant/flower that Zillah was named after.

Story Line: Although we know little about Zillah, we know that her husband was a murderer. He admitted to his two wives that he murdered a young man for injuring him. Lamech averred that if God planned to take sevenfold vengeance on anyone killing Cain, then he, Lamech, should be avenged 77 times. Contemplating Lamech’s words, readers aren’t sure whether his is bragging about his actions or admitting his wrong. Whichever Lamech did, most certainly his  wife Zillah, reaped  consequences.

Pondering Meaning: Zillah was named after a spiny, woody shrub (Zilla spinosa) that grows in desert, to include extreme desert, regions.  The website, Flowers in Israel, included that the brier named by Ezekiel is the zilla plant: “No longer will the people of Israel have malicious neighbors who are painful briers and sharp thorns. Then they will know that I am the Sovereign LORD” (Ezekiel 28.24 NIV). Ezekiel’s complete prophecy against Sidon is in Ezekiel 28.20-26. Sidon was a  Phoenician city.  Originally, Sidon was included in the inheritance of the tribe of Asher, but Asher didn’t conquer it. Sidon  gloated when Jerusalem was destroyed by Babylon.

If I identified one word that encompassed the story of Zillah in Genesis and the prophecy of Ezekiel against Sidon, that word would be malicious. Malicious means a desire to cause pain, distress,  or injury to another. Maliciously, Lamech  injured a young man in the process of murdering him. Most likely, Lamech’s action caused distress to the young man’s family and distress to his wife, Zillah. Sidon’s gloat over Judah’s pain, injury, and distress was malicious. I can just imagine Sidonians rubbing their hands together and laughing when Jerusalem fell.

Reflection: A dear friend told me recently that a mutual friend’s words hurt her through what she said. At about the same time, the mutual friend shared that she was hurt by my dear friend’s words. I need to always look at my own behavior and make sure that I don’t cause pain, injury, or distress to others. Do you find it easier to criticize others than to take accountability for what you do?

One thought on “First Polygamy”