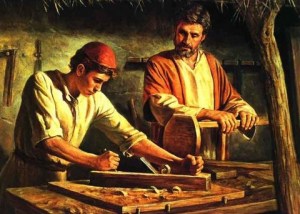 Joseph’s involvement begins with conflict and embarrassment. The woman he loves, but has not yet married, is pregnant. He has the right according to the law to register a complaint and have her executed for adultery. Think of how difficult it was to explain this to family and friends. Yet Joseph is compassionate and decides to divorce her quietly — before the Lord intervenes. In spite of public pressure to the contrary, Joseph stays with Mary, marries her and becomes Jesus’ guardian and father. This was because an angel told him to take Mary as his wife since her child was from the Holy Spirit.

Luther comments that “Joseph had nothing to go by save the Word of God and he accepted it. A godless man would have said it was just a dream, but Joseph believed the Word of God and took unto him his wife. Thus, he is for us an emblem of faith and virtue.” This situation must have produced a tremendous sense of loss for Joseph. This was not what he was hoping for. This was not his plan or expectation for life as a husband and father.

Another dream – this time to flee to Egypt, protecting Jesus even when it meant becoming a refugee. Joseph not only listened carefully but acted on God’s instructions. Joseph did exactly what God asked him to do. He didn’t wait until morning. He didn’t wait for better weather. He took immediate action.

When Jesus was about 12-years old, we even read of the experience that is a parent’s worst nightmare — to lose your child in the crowd. Luther considers how our Lord’s guardian let his guard down and lost track of Jesus. Luther writes that since Joseph “had received a solemn mandate to care for the child … it was a great fright and an especial heartache when they could not locate the child.” Luther goes on to write about what a painful three days they endured before locating him in the temple.

Reflection: Joseph is one of the unsung heroes of the Bible.