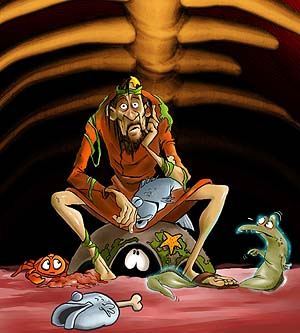 Heart of the Story: Jonah was an Israelite prophet who did not want to go to Nineveh and try to convince the Assyrians to repent.

Story Line: Most children know about Jonah. He is the prophet who  disobeyed God when God told him to go to Nineveh and exhort the Ninevites to repent. Jonah didn’t want to go there! After all, why should he, an Israelite, try to convince the Assyrians to repent? Jonah got  on a ship bound for Tarshish, in the opposite direction from Nineveh. Jonah believed that if he left the land of the Israelites, he could escape God.

A huge storm occurred in the Mediterranean Sea. Even  experienced sailors were frightened. They decided to cast lots to see who had disobeyed their god and brought the storm on them. When the lot fell to Jonah, he admitted that he was disobeying God by being there on the ship bound for Tarshish. Jonah told the sailors throw him overboard.  Reluctantly, the ship’s sailors threw Jonah overboard. Once Jonah was off the ship, the storm abated. The ship proceeded on its way. But Jonah was left in the Mediterranean Sea.

A large fish swallowed Jonah. Jonah’s prayed and called out to God while he was in the belly of the giant fish. The fish vomited Jonah onto the seashore. Later Jonah wrote about the experience (Jonah chapter 2); consequently,  we read what happened to him and what he thought while in the sea and in the belly of the whale.

Jonah described how the sea waters closed over him and sea weeds wrapped around his head.  Jonah noted that he was at the roots of the mountains in the ocean suggesting that he fell to the bottom of the Mediterranean Sea.  Jonah remained in the belly of the fish three days. Then, the fish vomited up Jonah onto dry land. (Ugh, I bet he was slimy). The land was on the eastern side of the Mediterranean Sea, not all that far from Nineveh. Then, Jonah went to Nineveh and preached repentance. The Ninevites repented; but, that is another story.

The Bible referenced seaweed only once and it was in conjunction with Jonah (Jonah 2.5 NIV). Although the New International Version translated the plant that wrapped around Jonah’s head as seaweed, other sources translated it simply as “weed” (ESV) or as “eelgrass.”

Pondering What Happened: Perhaps, the exact weed isn’t as important as what it symbolized. The seaweed captured Jonah. Capture means catching, winning, or gaining control by force Johan was captured, fell into the depth of the Mediterranean Sea, and a giant fish swallowed him. I have been captured, or caught, by Christ; and I am so glad. Now, I have to stop struggling and let God control my life.  The challenge, or perhaps not so much a challenge, is that God won’t control me by force. Bummer, I wish God would just “make” me do the right things. But, God doesn’t operate that way. He gave Jonah time to contemplate his disobedience and options for moving forward. Jonah prayed and decided to obey God is his life was spared.

God gave me time and will give most Christians time to do it God’s way. Just like Jonah decided to do it God’s way after he met adversity—in Jonah’s case major adversity, Christians meet  adversity in their walk with God. I am a true woman who came to psychological maturity in the late 20th century. My mantra was “I’m a self-made! I can do it myself!” I am no more a self-made woman than the prophet Jonah was able to escape God.

Perhaps one of my reasons for loving Jonah was that he put his actions and thoughts out there for the world to read. This Israelite prophet sent to the Assyrians showed us his struggles and gave us hope for meeting life’s challenges if we are captured by Christ.

Reflection: Do you ever say, “I can do it myself.”  The other day I read that when we do not pray, we declare our independence from God.