Heart of the Story: This Edomite killed 85 priests of Yahweh as well as every individual (women, children, babies) in the town of Nob.

Back Story:  Doeg was an Edomite. Edom was southeast of Judah in land now in Southern Jordan. The Edomites were offspring of Esau, Jacob’s (Israel) twin brother. Doeg was the head herdsman for King Saul. After Saul began to pursue David attempting to kill David, David went to Nob and met with Abimelech.  Abimelech was the head priest at Nob, but,  had no knowledge that King Saul was pursuing David. Abimelech knew that David was Saul son-in-law and believe that David was the head of Saul’s body guard.

When David met with the priest Abimelech, the priest in inquired of the LORD for David, and David and his men food. Also, Abimelech gave David sword of Goliath the Philistine which was in the synagogue over which Abimelech presided. Doeg was at Nob and saw how Abimelech assisted David. Doeg took the information to King Saul. 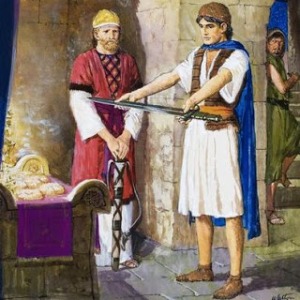 Pondering Relationships:  Doeg painted the priests of Nob as assisting David who King Saul labeled an insurgent rather than an innocent fugitive. Doeg misrepresented to Saul, Abimelech’s motives for assisting David. In this account Abimelech seemed innocent of willful conspiring with David against King Saul.

Why did Doeg misrepresent the truth to King Saul and why was he willing to go on a killing spree against the priests of Nob and their entire town including innocent children and animals? Where did all Doeg’s rage come from? I can think of two places.

Psalm 52 was written by David. It describes his anguish over Doeg’s evil, dastardly actions.

Reflection: Can you think of other reasons why Doeg acted as he did?