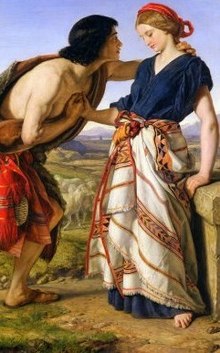 StoryLine: When Rachel did not become pregnant, she gave her servant Bilhah to Jacob to conceive children on Rachel’s behalf. Bilhah birth two sons which Jacob fathered. Some Bible places Bilhah is named a concubine (Genesis 25.32). In others, Bilhah is named wife (Genesis 30.3-4). At one point, Bilhah is named Jacob’s servant (Genesis 33.2). Apparently, Bilhah had a tent separate from Leah and Rachel (Genesis 31.33).

After Rachel died, Jacob and Leah’s eldest son Reuben went into Bilhah’s tent and had sex with her. At least one Bible commentator asserted that Reuben raped Bilhah; however, the Bible doesn’t say that. Jacob learned about Reuben having sex with Bilhah but took no immediate action, but Jacob didn’t forget.

When Jacob was about to die, he called his children and gave each a blessing/prophecy (Genesis 49:3-4). He started with Reuben his first born and said, “Reuben, you are my first-born, my might, and the first fruits of my strength, pre-eminent in pride and pre-eminent in power. Unstable as water, you shall not have pre-eminence because you went up to your father’s bed; then you defiled it – you went up to my couch!” (Genesis 49:3-4). Reuben lost his birthright because he had sex with Bilhah.

Pondering Relationships:  Did Reuben commit adultery when he had sex with Bilhah? I believe that he did because Bilhah was Jacob’s (Reuben’s father) wife/concubine according to Chaldean law where Jacob and his family lived. The conundrum is that Reuben’s action occurred before the Mosaic Law which codified adultery. Whether adultery was codified or not, Jacob remembered Reuben’s sex with Bilhah. To Jacob what Reuben did was serious enough to strip Reuben of his birthright of being Jacob’s first born son. Jacob considered Reuben’s sex with Bilhah as adultery and he punished Reuben for his act.

Reflection: Reuben paid for his adultery with loss of his birthright. Was Jacob fair to Reuben?