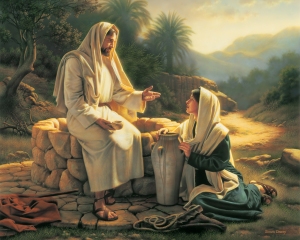 Heart of the Story: An adulterous Samaritan woman encounters Jesus.

Back Story: Most of the time Jews traveling back and forth between Galilee and Jerusalem went to the east side of the Jordan River so they would not have to walk through Samaria. Jews despised Samaria which was resettled by non-Jews after Assyria conquered Israel and deport most Jews who lived in the Northern Kingdom. Then, Assyria repopulated the area of Samaria with individuals from other parts of the Assyrian Empire. Some-time later, the Assyrian’s sent so-called Jewish priest to instruct the new population to worship God. However, the god that Samaritan’s worshiped was not the true God of the Jews.

Jesus and disciples stopped at a town (Sychar) well on the outskirts of the town. His disciples went into town to buy food. While Jesus waited at the well, a Samaritan woman came to draw water. Jesus asked her for a drink. The Samaritan woman was reluctant to give a Jewish man water (or anything else); but, she hid her reluctance behind societal rules in Jewish culture. She expressed shock that a Jewish man would (a) talk to a woman, (b) ask a Samaritan to draw water for him, and (c) ritually contaminate himself by drinking water from a Samaritan’s woman’s vessel. Jesus responded that if she knew who he was, she would ask him for living water.

In the conversation between the Samaritan woman and Jesus, Jesus identified her past and present sins. She had multiple husbands in the past and the man she was currently living with was not her own. This comment by Jesus seems to imply the Samaritan woman was living with a man, not married to him, and the man was married to another women. She was an adulterer and so was the man she lived with.  In response, the woman went into Sychar and told everyone she came into contact with a man who knew everything about her. They (towns-people) want to the well and invited Jesus to stay in the town with them. He stayed there two days. Many of the individuals of Sychar came to believe in Jesus as the Messiah.

Pondering Relationships: The Samaritan woman was confused, both by this Jewish man and his words. She didn’t understand how Jesus could give her living water and she would never thirst again. Still, she thought that having to never thirst again was a good idea.  That meant that she would not have to go to the village spring or well as often. The woman legitimized her reluctance to ask Jesus for living water with a question in which she referred to a revered ancestor: was Jesus more important than her ancestor Jacob (grandson of Abraham) who dug and used Sychar’s well? Certainly, she didn’t expect Jesus to respond that indeed he was more important than Jacob. He said that he was the looked-for Messiah.

Initially, the people of Sychar believed that Jesus was the Savior because of the woman’s testimony. After they interacted with Jesus, they believed because they heard Jesus’ own words.

Often, I wonder if this woman changed her life-style after meeting Jesus. Did she stop her adultery, living with the man she was with. Did meeting and believing on Jesus cause a change her behavior? Or did she believe that Jesus was the Messiah, but continue with her same behavior?