Back Story: King David and Bathsheba’s adultery began in the spring. That year David remained in Jerusalem when the Israelite army went out to fight the Ammonites. Unable to sleep one night, David walked on the palace roof. Probably, the weather was mild and the night clear, stars shone over Jerusalem. Looking down from his palace roof, David saw a woman bathing. The woman was Bathsheba and she was beautiful.

Bathsheba was washing and purifying herself after her monthly menses, which occurred seven days after the onset of her period. Bathsheba’s decision to bathe, possibly nude, where she could be seen is perplexing. Her home was in a good part of Jerusalem, but at a lower level than the royal palace. She knew the royal palace over-looked her home. She knew, or had cause to know, that anyone on a roof at a higher elevation could look down and see her activities. On the other hand, perhaps Bathsheba bathed monthly in this same location after her menses. Bathing there was so much a part of Bathsheba’s routine that she didn’t think that someone at a higher elevation would look down and see her disrobed body. On this spring night, probably Bathsheba had only a small oil lamp burning while she bathed. Light and shadows played over her beautiful body.

Bathsheba wasn’t a member of the Israelite royal family, but she had status in Jerusalem which came from the men in her life. She was the daughter of Eliam and wife of Uriah the Hittite. Both Eliam and Uriah were members of David’s thirty elite soldiers (2 Samuel 23:20-39). At this time Bathsheba’s husband and father were out of Jerusalem fighting with the king’s army. Eliam’s father and Bathsheba’s grandfather was Ahithophel, one of David’s counselors. Ahithophel was in Jerusalem.

Story Line: After seeing Bathsheba bathing, King David sent messengers to bring her to the royal palace.  When Bathsheba arrived at the palace, David had intercourse with her. Because of her father and husband’s status, Bathsheba could have tried to restrain David’s lust or denied him even though he was the king. One way she could have attempted to influence David was appealing to Mosaic Law. Both Bathsheba and David knew that Mosaic religious law and cultural norms forbid any man from forcing a married woman to have sex with him. Bathsheba could have simply stated that she didn’t want to have intercourse because she loved her husband and didn’t want to be disloyal sexually to him.

Perhaps, Bathsheba did try to influence David not to have sex with her. Bathsheba’s attempt wasn’t recorded in the Bible because it would make the heroic David look like a rapist. On the other hand, perhaps the power gap was just too large between the young woman, Bathsheba, and her king. Bathsheba couldn’t deny King David anything he wanted to include herself.

Pondering Relationships:  In the days following the night Bathsheba and David spent together, David didn’t call Bathsheba to him. He thought that Bathsheba would go back to her life as wife to Uriah and tell no one of their sexual interlude. King David saw Bathsheba as a one-night stand; however, Bathsheba became pregnant from intercourse with David. When Bathsheba realized she was pregnant, she was frightened. Her husband Uriah was away from Jerusalem fighting with the Israelite army. He couldn’t be the father of her pending child. She could be accused of adultery and stoned. She would humiliate her entire family.

What was Bathsheba going to do? Bathsheba sent “word,” possibly via a servant, to David that she was pregnant. The Bible didn’t record any message back from David to Bathsheba; nonetheless, David tried to remedy the situation. He called Uriah home from the battle field. David expected Uriah to go to Bathsheba while he was home and have intercourse with her; thus, Bathsheba could claim that Uriah was the baby’s father. Although Uriah came to Jerusalem at King David’s command, he didn’t go home or see Bathsheba. Uriah slept on the floor of the king’s palace. When David asked Uriah why he didn’t go to his home, Uriah’s answered that his commander (Joab) and his fellow soldiers were camped in the fields. It wasn’t right for him to go to his house, eat, drink, and lay with his wife.

When Uriah came from the battlefield to Jerusalem, he went immediately to the palace and reported to King David. Very few things are secret in a family, business, or court. Someone always sees and talks about other people’s behavior. Individuals in the palace knew that David had the beautiful Bathsheba brought to him. They knew that David kept Bathsheba with him all or part of the night. Palace guardsmen would have been angry that King David had sex with Uriah’s wife, the same Uriah who was out fighting with the Israelite army while the king lolled, securely in his palace. It isn’t difficult to believe that some offended guardsman told Uriah that David had Uriah’s wife brought to him.

In a final effort to hide his adultery with Bathsheba, David ordered Commander Joab to have Uriah killed on the battle field. The Bible doesn’t describe how Bathsheba felt when she learned of her husband’s death. Did she mourn his death because it was Israelite custom or because she loved him? One of the Jewish sages wrote that Bathsheba and Uriah’s marriage was talked about throughout Jerusalem because of their love for each other. The strong, mighty warrior showed a tender love for his beautiful wife. If this story is true, Bathsheba’s period of mourning for Uriah was bitter-sweet. Bitter, because Uriah was killed; sweet, because hopefully he never learned of her adultery. 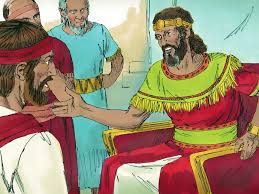 Outcome of Adulterous Relationship. Bathsheba became King David’s wife after she mourned Uriah’s death. Within days of the birth of Bathsheba and David’s baby, the esteemed prophet, Nathan, visited David. He told David that Bathsheba’s baby would die because of David’s sin. Nathan’s reprimand put the onus of the adultery on David rather than on Bathsheba. King David accepted his responsibility for the death of Uriah, nonetheless, he was not punished for his act of adultery under Mosaic Law.

Reflection: Can the rich and powerful get away with sin and law breaking?