Heart of the Story:

Astonished, Mary’s mother responded, “Mary, you know that you and Joseph shouldn’t have had sex until the betrothal period was over and you were married. What were you thinking?”

Mary’s mother looked at her daughter, trying to process what possibly could have happened. “Oh, Mary, were you raped by one of those awful Roman soldiers?”

“No, Mom. I never had sex with anyone. The father is God.” Mary replied.

Story: Can you imagine a conversation such as this one in a small house in Nazareth? Yet, it could have been the conversation between Mary and her Mother. During it, Mary tried to influence her Mother to believe she was carrying a baby who God fathered. Repeatedly, Mary stated with conviction what she believed was fact. She wouldn’t be swayed. Mary claimed that she was visited by an angel and agreed to the angel’s proposal that she be the mother of a baby whose father was supernatural. Mary legitimized her assertion with Isaiah’s Old Testament prophecy that a virgin would conceive the Messiah. Mary’s mother had a relationship (history power) of 13-15 years with her daughter. In those years, Mary’s mother found that her daughter’s character was outstanding; yet, how could she believe such an implausible story?

We don’t know if Mary ever convinced her mother that her pregnancy was from the Spirit of God; however, Mary’s father was told of Mary’s pregnancy. He took the news to Joseph, Mary’s betrothed. Joseph denied that he was the father of Mary’s child. Mary’s father told Joseph exactly what Mary told her mother. Probably, neither man believed Mary’s statement that the Spirit of God got her pregnant. Joseph determined to set Mary aside quietly so that she wouldn’t be stoned for adultery.

The order of the two subsequent events isn’t clear; however, both occurred: 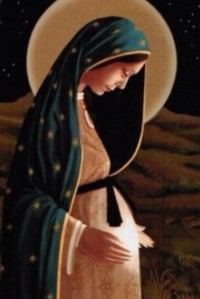 If I were unfolding these scenarios, I would have Joseph marrying Mary before she visited Elizabeth. Joseph may have been happy to have his bride leave his home for two reasons. First, if Mary was gone from his house, Joseph wouldn’t be tempted to have sex with his bride. Second, perhaps Joseph thought “out of sight, out of mind.” Some of the incessant gossip about Mary and by extension about Joseph would cease if Mary was absent from Nazareth.

When Mary tried to influence Joseph to believe that God fathered her child, she would have used the Jewish belief that the Messiah would be born to a virgin (legitimizing) which Mary claimed to be. Joseph was of the lineage of David, even though he was a lowly carpenter and very poor.  Consciously or unconsciously, Mary appealed to Joseph’s belief in the prophecy that the coming Messiah would be born to King David’s offspring. Joseph was a righteous man. He wanted to believe his betrothed was telling the truth, but, could he trust her? Mary could have used tears (manipulation) to convince Joseph of her innocence.

When Mary went to visit her relative Elizabeth, she escaped all the gossip and ridicule of individuals, particularly women, in Nazareth. Woman and girls who were once her friends started to shun Mary. No one wanted to be friends with a “fallen” woman. When Mary walked by them, former friends pulled their dresses out of the way, so Mary wouldn’t contaminate them. 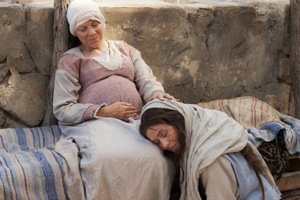 In the hill country of Judah, Elizabeth was also pregnant, and she was eager to see her younger relative. Elizabeth’s unborn baby jumped in Elizabeth’s womb when Mary, carrying the infant Messiah, entered Elizabeth’s home. In Mary’s response to Elizabeth’s greeting, we learn of Mary’s expressive power and her eloquence in statements that have come to be known as The Magnificat (Luke 1:46-48). Careful reading of The Magnificat showed that Mary attempted again to influence listeners that her child was from God. “From now on all generations will call me blessed, for the Mighty One has done great things for me” (Luke 1:48-49). Despite Mary total acceptance of God’s plan, in these words we hear the hurt of a young 13-15 year-old girl.

The next several events in Mary’s life were affirming to her. Joseph took her (his wife) with him to Bethlehem. Shepherds told a story of a heavenly host announcing the birth of the infant to them. In the temple both Simeon and Anna identified baby Jesus as the Messiah. Important astronomers came to Bethlehem to worship the young child. These wise men brought gifts, gold, frankincense, and myrrh, for the child. The Bible noted several places that Mary remembered these events and pondered them in her heart. Ponder means to contemplate, deliberate, or think over. Being a teen-ager, I bet Mary also concluded: “Good! I have been justified. Now, Joseph won’t think that I betrayed him.”

When God told Joseph to take Mary and her son to Egypt and live there for a time, Mary didn’t attempt to influence Joseph otherwise. She accepted that God appeared to Joseph and ordered the move. By God’s design, the poor family had resources (gold, frankincense, and myrrh) to fund their trip to Egypt. Several years later, Joseph’s family left Egypt, but rather than return to Judea, they traveled north and resettled in Nazareth. Resettling in Nazareth was hard for Mary. All of the town’s women knew that she became pregnant before marriage. Her reputation as a virtuous woman was profoundly compromised in the Nazareth region.

If you want to read the entire story of Mary, Mother of Jesus, read the book Out of the Shadows, Exposing the Power of Bible Women. You can find this book at http://www.CarolynRothMinistry.com