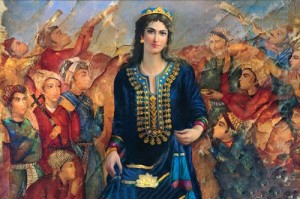 Heart of the Story: Queen Vashti refused to appear before a drunken king and his drunken guest so the king divorced her.

Backstory:  Xerxes (Ahaseurus) was king of the Persian Empire from about 486-465 BC. His capital city was at Susa.  In the third year of Xerxes reign, he gave a costly banquet for a full 180 days. The banquet was for all of his nobles, principles, and military leaders throughout all 127 provinces. The banquet had two purposes: 1) Xerxes wanted to show off his wealth and 2) he wanted to garner support for a military invasion of Greece.

After this 180 day banquet, Xerxes gave a seven day banquet for all the people in Susa. This banquet was held in a beautiful enclosed garden decorated with cotton and linen curtains to keep out the bright sun and rain. A lot of wine was served. On the final day of this banquet Xerxes was in high spirits (inebriated) because of all the wine he drank.

At the same time that Xerxes gave this banquet for the men, his queen, Vashti, gave a banquet in the royal palace for the women. Vashti was unbelievably beautiful. She was a trophy of Xerxes wealth and glory.

Story Line: In a drunken state, King Xerxes wanted to show off another one of his possessions, perhaps his greatest one. Xerxes sent word to Queen Vashti that she appear at the men’s banquet wearing her royal crown. Vashti refused. According to Josephus (Whiston, 1987), King Xerxes ordered Vashti several times to come before his banquet but she refused the king each time.

King Xerxes was furious and asked his wise men what action he should take because Queen Vashti refused the king royal order. The wise men recommended that King Xerxes never allow Vashti to see his face again; and that Xerxes divorce her.  So he did. Vashti was no longer Queen of Persia and had to leave the royal palace.

Pondering what happened:  A drunken or half drunken king wanted to impress his guest so he determined to bring out what was for him the most beautiful, striking thing/item/entity in the Persian kingdom.  That entity/person was Queen Vashti. The Archeological Version of the NI V Study Bible said that it was not just alcohol that caused Xerxes to call for Vashti. The wily Xerxes expected that seeing the beautiful Vashti would stimulate patriotism in the banqueting men and inspire them to go to war with Xerxes against the Greeks.

Imagine the shock of the King of Persia and his guests when the Queen refused to be displayed at the men’s banquet. Several reasons may have contributed to Vashti refusal:

1) She did not feel that because of her beauty, she was an object for display.

2) Women did not normally attend male banquet. That was the reason Vashti was having a separate banquet for the women.

3) According to Josephus, Xerxes intended to show Vashti naked to his banquet guest! She was to wear only her royal crown. Likely, this interpretation of King Xerxes instruction to Queen Vashti was correct because many of the male banquet attendees would have seen the Queen previously at court functions. They knew the extent of her beautiful face.

Every Persian laws and cultural mores of modesty would have been ignored and offended if Vashti agreed to Xerxes command to appear naked before the assembled men.

4) Some writers suggested that Vashti was pregnant. If they are correct, showing her pregnant nude body to the men would have been even more offensive to the Queen.

Because Queen Vashti disobeyed King Xerxes, he could have had her immediately killed. The king allowing Vashti to live suggested that he knew his request was unacceptable. At the same time, being the King he had to punish Vashti in some way. His wise men came up with a plan for him to divorce her.

Reflection: It is really hard for a man, woman, child to admit they are wrong as Xerxes should have admitted he was wrong. Are you ever wrong?

3 thoughts on “Vashti, Disobeyed a King”