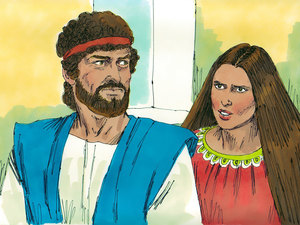 Heart of the Story: Initially, Michal loved David when they got married. Realistically, David never loved Michal, only what she could do for him.

Back Story: David married King Saul’s second daughter, Michal, most likely when he was in his late teens or early twenties. Michal was probably in her mid-teens. She was infatuated over the attractive, much heralded, warrior David.  King Saul wanted a marriage between David and Michal. He required only that David bring him the foreskins of 100 Philistines for a bride price. In reality, King Saul hoped that David would be killed when he went into battle with the Philistines to obtain their foreskins.

The Bible recorded that David was pleased to become Saul’s son-in-law through marriage to Michal (1 Samuel 18:26). Immediately he and his men left Saul’s court. Because of God’s protection, David was not killed in battle with the Philistines. He brought Saul 200 Philistine foreskins rather than the 100 that Saul identified as the bride price. Although Michal loved David, the Bible did not record that David loved Michal (1 Samuel 18:20).  A later conversation between the David and Michal shows Michal as a bitter woman and David as a man angry with his wife.

Story Line: On and off over the next several years, Saul continued to urge his son Jonathan and all his attendants to kill David. One day as David was playing the harp,  Saul, threw his spear and tried to pin David to a wall. David escaped and apparently when to his home. Shortly afterward Saul sent men to David and Michal’s house. The men were to watch the house and to kill David in the morning. Michel warned David that if he didn’t run for his life that night, he would be killed the next day.

Michel lowered David down from a window in an area that Saul’s men who guarded the house would not see him. Michal didn’t leave with David; instead she stayed in the house to buy time for David to flee. To further slowdown pursuit of David, Michal put a statue of a household idol (terephim) under a blanket on David’s bed. She topped the idol with goat’s hair. When Saul’s men came to capture David, Michal told them that David was ill and couldn’t go to her father. Saul didn’t care if David was ill or not; he directed his soldiers to bring David to him even if they had to do it with David in bed. King Saul openly admitted that he planned to kill David.

Saul’s men entered David and Michal house and went to David’s room. They saw the idol in the bed with its head covered with goat’s hair and reported the ploy to King Saul. Angrily, Saul asked Michal why she deceived him and allowed David to escape. Clearly, Saul’s reason for marrying Michal to David, i.e., to cause David’s death, had not materialize. Instead, Michal protected David.

About 1011-1012 BC, King Saul and three of his sons were killed in a battle against the Philistines; in 1010 BC David was appointed king over Judah. Soon afterward, David asked King Ish-Bosheth, the king of Israel and the youngest son of Saul, to get Michal back for him. By this time Paltiel and Michal may have lived as man and wife for ten years. David wanted Micah not because he loved her, but because her lineage strengthened David’s claim to the throne of all Israel. The possibility that Micah may bear David a son who could be the next king was an inducement for the northern tribes to support David’s kingship.

Pondering Relationships: Michal abetted David’s escape, thereby saving David’s life. Michal’s actions mirror those of a woman in love. Wisely, Michal gave her father a logical, if untruthful, answer to his question. Michal told her father that she feared the rough warrior that Saul wedded her to would kill her if she didn’t aid him. Apparently, Saul believed Michal’s explanation, forgetting that his daughter loved David and that love motivated her behavior.

Over the 8-10 years, David was on the run from King Saul, David made no attempt to retrieve Michal so she could be with him. Instead, David married two other women. Perhaps David was grateful to Michal, but he wasn’t loyal to the royal princess who saved his life. During these years, King Saul tried to block David’s claim to the throne by marrying Michal to Paltiel, son of Laish who was from Gallim. Technically the Michal-Paltiel marriage was illegal because Michal was already married to David.

At David’s insistence, Michal’s brother,King Ish-Bosheth, retrieved from Patiel and sent her to David. A short 3-4 years later, the northern tribes of Israel accept David’s kingship. Michal was a beautiful royal princess used as a pawn first by her father and then by her husband, King David. At no point in the Bible do we read that she was loved by either her father or David; however, Paltiel loved her. The Bible recorded that Paltiel was so grief-stricken over Michal’s loss that he followed weeping when Michal was taken from their home. Paltiel only turned back from following Michel when Abner (Ish-Bosheth’s commander) ordered him to do so.

Page Two of the Story: When he was at least 37 years old, King David brought the Ark of the Covenant to Jerusalem.  Wearing nothing but an ephod, a type of apron worn by priests, David danced and whirled in ecstasy in front of the Ark as the procession made its way toward the palace. Aghast, Michal watched this spectacle from her window. After all she had sacrificed for David, including her adoring spouse, Paltiel, Michal saw her royal husband cavorting down the street showing his near-naked body to women and men alike. Furious, Michal later rebuked David for his behavior, accusing him of showing off his sexuality just so women would look at him. David fired back that God chose him to be king of Israel over her father, Saul, and that his dancing was religious ecstasy, not sexual vulgarity: “I will dance before the LORD and dishonor myself even more, and be low in my own esteem; but among the slave girls that you speak of I will be honored” (2 Samuel 6:14).

In other words, David told Michal that he’d rather have the sexual admiration of his female servants than the respect Michal, whose lineage justified his kingship. How humiliating this must have been for her! 1 Samuel 6:23 closes Michal’s story with a sad report by saying that “to her dying day Michal, daughter of Saul, had no children.” Many commentators postulated that the reason Michal had no children was that David refused to sleep with her after she rebuked him. An alternative point of view is that Michal was barren. Note that she had no children when she and David were first married; nor did she have children the 10 years she lived with her husband Paltiel.

Reflection: Why do think Michal chastised King David for rejoicing before the Ark of the Covenant. Why do you think that David was furious at her?

Both of King Saul’s daughters were pawns and victims. If you want to learn more about lives of other royal women in the Bible, go to Carolyn Roth Ministry (http://www.CarolynRothMinistry.com/) and consider buying the book, Lesser Known Bible Characters.