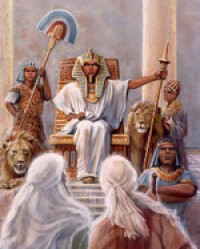 Heart of the Story: The two Israelite midwives thwarted Pharaoh’s command that they kill all Israelite newborn males.

Back Story: About 1876 B.C., Jacob, his sons and their families entered Egypt to escape the famine in Canaan. They were shepherds. Jacob’s 11th son, Joseph, was a high ranking official in Egypt second only to Pharaoh in power. Pharaoh welcomed Joseph’s family and gave them the land of Goshen for their flocks. Egyptians were farmers and believed that shepherds were dirty. By giving them Goshen, the shepherds were kept separate from the Egyptians.

In Egypt the Israelites grew in number and prospered growing from a population of about 70 to hundreds-of- thousands; perhaps even over a million people in several centuries. Eventually, a new ruling dynasty came into power who did not know the contribution Joseph made to Egypt. The new pharaoh looked at the number of Israelites – foreigners – living in Egypt and was afraid. The king’s fear was that should a foreign army attack Egypt, the Israelites would join with the army and overthrow him and his government. Further, the Israelites would escape from Egypt.

In response to his fear and dread of the Israelites, Pharaoh made the Israelites slaves, set slave masters over them, and caused them to be worked very hard. The Israelites were given the job to make mortar and brick and build storehouses. They were made to do all types of field work, e.g., digging water canals, sowing and reaping grain. The Bible recorded that the Israelites were afflicted with heavy burdens. Afflicted means “distressed, plagued, tormented, hurt and suffered.” Despite this harsh labor, the Israelites continued to multiply in number. The Bible’s exact words were, “the more they were oppressed, the more they multiplied and the more they spread abroad” (Exodus 2:12).

Story Line: When Pharaoh saw that slave labor didn’t reduce the number of Israelite male births, he called to him the Israelite midwives. Only two Israelite midwives were named in the Bible, Shiphrah and Puah. Pharaoh gave the two midwives orders to kill all newborn Israelite sons they delivered. The midwives had pharaoh’s permission to allow the daughters to live.

Pondering Relationships: Apparently Pharaoh believed the midwives that the Israelite women were vigorous and gave birth before either of the midwives could get to their homes. Considering that there were only two midwives for the all the women of childbearing age (perhaps as many as 300,000), this is a reasonable explanation. While the midwives were on their way to one birthing, another woman or several other women, would deliver their baby(ies). Pharaoh didn’t accuse Shiphrah and Puah of disobeying him or punish the two midwives. God was pleased with the midwives actions. The Bible recorded that their actions proved that they feared God; God gave the two women families of their own.

Pharaoh remained frightened by the increase in Israelite numbers. His next edict was that every son born to a Hebrew woman be thrown into the Nile River, but that daughters could live.

Reflection: Fear causes individuals to see problems were there are none and to lash out cruelly.  Have you ever done that?