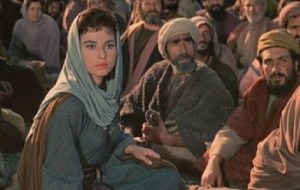 Heart of the Story: The prophetess Huldah authenticated the Book of Law found in the Temple and foretold the destruction of Jerusalem. She helped to bring about spiritual revival in Judah.

Background: Josiah became king (640-609 B.C.) when he was eight years old. He attempted to turn Judah from idolatry back to God worship. In the process of repairing the temple, the Book of Law was discovered; most scholars believe that the Book of Law was Deuteronomy. By this point Judah had abandoned God and was ignorant of the Law. When the Book was read to Josiah, he was devastated. He believed that God’s righteous anger would fall on Judah because the nation rejected God and turned to idols. King Josiah ordered his top officials to inquire of God what would happen to him and the remnant in Israel and Judah.

Story Line: The officials, including the temple high priest, went to the prophetess Huldah. Her husband, Shallum, was the keeper of the temple wardrobe. Writers speculated that Shallum was Josiah’s teacher/mentor when Josiah was a child. Huldah lived in the second district, an area incorporated into Jerusalem as part of Hezekiah’s western expansion of Jerusalem. Some Bibles annotated that she lived in a college, also called a house of doctrine (American King James Version, Jubilee Bible). The name Huldah comes from chôled meaning a weasel from the animal’s rapid gliding motion (Strong, 2010).

Possibly Huldah was a relative of Jeremiah. The King’s delegation went to her rather than Jeremiah because they believed, or at least hoped, that she would give a softer or more favorable interpretation of God’s pending wrath on Judah (Neiman, 2001). In reality, because prophets and prophetess declared God’s exact words without interpretation, Huldah’s words would have been the same as Jeremiah’s.

After the king’s delegation made their request, Huldah response began with “this is what the Lord, the God of Israel says.” Huldah words were not encouraging. God planned to bring disaster on Jerusalem and its people – all the curses written in the Book of Law – because Judah rejected him and worshiped other gods. At the same time, because King Josiah heart was responsive to the Book of Law and because Josiah humbled himself before God, God would wait to destroy Jerusalem until after Josiah died in peace.

Analysis of the Relationship: Huldah’s primary relationship was with God. She spoke God’s words without embellishment or fear. Initially she identified King Josiah as “the man who sent you.” Although a king, Josiah had no status before God. Only later did Huldah refer to Josiah as the king of Judah when she identified his responsive heart and humility before God.

Some Bible commentators questioned whether or not Huldah was a true prophetess because King Josiah didn’t die a peaceful death; rather he was killed in a battle with Pharaoh Neco (2 Chronicles 35: 20-24). Importantly, Pharaoh Neco warned Josiah that God would destroy Josiah if he battled Neco. King Josiah ignored the pharaoh’s warning and was wounded in the subsequent battle. His officers took him back to Jerusalem where he died. Pharaoh Neco didn’t follow the wounded king back to Jerusalem or besiege the city.

Josiah’s death from battle occurred because of his disobedience to God, given by the mouth of a pagan pharaoh. Possibly Josiah’s own advisors warned him to avoid a battle with the Egyptian forces. The way Josiah died doesn’t negate the prophecy of Huldah; had Josiah not entered into battle with Neco, he could have lived longer than his 39-40 years and died a peaceful death.

Huldah’s place of prophecy was between the first temple’s two southern – and busiest – gates (Neiman, 2001). When the second temple was built, the gates were named after Huldah to commemorate her teachings and prophecy. Excavations on the second temple site revealed that the “Gates of Hulda” were built directly on top of those where supposedly Huldah originally sat. At the present time, the two gates of Huldah in the Jerusalem old city wall are blocked by stone.

Conclusion: Like her namesake the weasel, that digs an intricate system of tunnels linking an entire community, Huldah linked the despair of the first temple’s final days to the hopeful new generation of the second temple (Neiman, 2001).

Copyright: January 2015, Carolyn A. Roth; use only with permission.