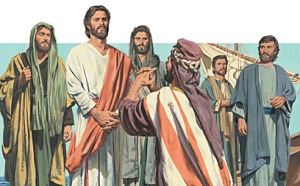 Heart of the Story: Jairus loved his daughter enough to risk censure from the Jewish elite by asking the young Rabbi, Jesus, to heal her. Possibly, Jairus even believed that Jesus could raise his daughter from the dead.

Jairus was a ruler of a synagogue which is similar to a church administrator today. He was a layman responsible for looking after the buildings and supervising worship. Jairus had one daughter, a 12 year old, who became ill. The Bible didn’t record how long she was ill; but by this story, she was in critical condition.

Desperate to save his daughter’s life, Jairus found Jesus, fell at his feet, and pleaded with him to heal his daughter. For Jairus to seek out this itinerant young Rabbi was noteworthy. Most synagogue elite actively opposed or discounted Jesus. Jairus didn’t think or care what they thought; he thought only of his beloved daughter and how to get her healed.

Jairus was relieved and happy when Jesus said he would go to his house and heal his daughter. Likewise, he must have been disturbed when Jesus stopping to heal a woman. Possibly, he wanted to tug at Jesus’ hand and say “please, please, let’s go! My daughter is really, really sick.”

Then, the unthinkable happened; men arrived from Jairus’ house and told Jairus that his beloved daughter was dead. No doubt, Jairus wanted to wail with grief. Immediately, Jesus told Jairus to not be afraid and to believe. He continued walking toward Jarius’ home. In the time it took to reach his house, Jairus was hoping, more than believing, that the men were wrong about his daughter’s death. Could this young Rabbi do something—anything—to ensure that his daughter lived?

When Jesus arrived at Jairus’ home, the household was loudly mourning the daughter’s death. Jesus entered the home and before he even looking at the girl declared that she wasn’t dead, but merely asleep. Jesus put everyone but Jairus, his wife, and disciples out of the house. Then, he went to where the child lie, took her by the hand, and said, “Little girl, I say to you get up!” (Mark 5:41 NIV). Immediately, Jairus’ daughter stood up and walked around. Jesus directed the parents to feed her. He gave them strict orders to tell no one that he healed the girl

Pondering Relationships: Jairus’ daughter was 12 years-old. Jesus called her a “little girl.” Perhaps her stature was small and she wasn’t yet into puberty. Although most certainly, Jairus spoke Hebrew and Greek, Jesus spoke to the girl in Aramaic. Aramaic was the common language spoken in the Holy Land in the first century AD. Because the child was female, most likely she had no formal schooling and never learned Greek or Hebrew.

Jairus loved his daughter and didn’t care who knew it. No doubt he contacted the best physicians in Capernaum area to heal her; however, they could do nothing for the girl. Probably, Jairus had synagogue priests make a special sacrifice for his daughter’s healing. Priests may have come to his home and prayed for the girl. After Jesus touched the young girl and told her to get up, immediately she started to walk around. There was no period of convalescence where she gradually got her strength back. Likely, both Jairus and her mother hugged her so tightly that she had little chance to move.

Few things are tenderer than a father’s love for a young daughter. Often the father is large and muscular, while his daughter is small and fragile. He has learned to handle his daughter with care and to modulate his voice so she will be encouraged. Jairus was this kind of father and Jesus knew it. Jesus honored and reinforced Jairus’ love for his only daughter.

As Jairus’ daughter grew into a woman, she would hear the story of her father defying synagogue authority and custom to save her life. Of course, she would be grateful to the young Rabbi for healing her; but, most of all she would remember how much her father loved her. Her important father fell at the feet and begged a young Rabbi to save her life. Her father’s valuation of her influenced her own self-worth.

Reflection: The way that Jairus loved his daughter is the same way that our heavenly Father loves us. How would you describe God’s love for you? Does God consider you fragile?