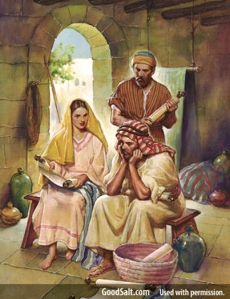 Heart of the Story: Aquila and Priscilla were Christian converts friends of Paul, and sensitive in their approach to developing Christians. The Bible presented them as equals in the newly formed church.

Back Story: When Emperor Claudius determined to rid Rome of all Jews, Aquila and Priscilla were exiled from Rome. Probably, they were Christians before they met Paul in Corinth. The couple was tent makers like Paul. They got along with Paul so well that he stayed with them. While in Corinth, Aquila and Priscilla formed a Christian church in their home.

One Sabbath Aquila and Priscilla’ heard a visitor, Apollos, speaking in the Ephesus synagogue. Apollos was a learned Jewish scholar from Alexandria, Egypt. He spoke eloquently about the coming of Messiah, but, knew only the baptism of repentance preached by John. After the synagogue meeting, Aquila and Priscilla invited Apollos to their home. There, they explained the life and death of Jesus and that he was the expected Messiah. Apollos received their message and became a missionary for Christ.

Pondering Relationships: Aquila and Priscilla shared a common vocation, e.g., tent makers. Probably, the couple was moderately well-to-do. Most likely they were middle-aged; no children were associated with them. Both loved Christ and helped Paul.

The couple’s thoughtfulness is evidenced by their approach to Apollos. Neither confronted Apollos in the Jewish synagogue; nor attempted to embarrass Apollos by their superior knowledge of Christ. Instead they invited him to their home, probably for a meal. Over the meal they explained Christ’s life, his finished work on the cross and the baptism of the Holy Spirit. Their considerate approach added a strong voice to spreading the good news of Jesus Christ.

Reflection: Several years ago, I was in a church home group. One couple was living together, but not married. I wish I had modeled Aquila and Priscilla behavior toward Apollos and invited the couple home for supper. Lovingly, Bruce and I could have identified that sex outside of marriage is a sin. As a Christian, I can’t shrug and say, “Well, they’re consenting adults;” “After all they’re going to get married;” or “It’s not my job to be judgmental.” Silence is consent. When Christians don’t speak out about sex outside of marriage, they condone it. God tells us, “if anyone is caught in sin, you who are spiritual should restore them gently” (Galations 6:1 NIV).

Lesser Known Bible Characters is a book I wrote two years ago on Bible characters that although relatively obscure played a large role in Christian’s faith. Please consider reading this entire book. You can purchase at http://www.CarolynRothMinistry.com/