Heart of the Story. The men from Jabesh Gilead, a town in Gad, secretly stole the bones of King Saul from Beth Shan where the Philistines hung them after killing Saul and his son. By this act they redeemed their reputation as being disloyal to the nation of Israel.

Back Story: Jabesh Gilead was east of the Jordan River in the tribal lands of northern Gad. The tribe of Gad and Benjamin were geographically aligned. When the Israelites journeyed in the wilderness, the formation of tribes had Benjamin and Gad’s tribes marching next to each other and positioned beside each other in camp. In the Promised Land, Benjamin was located across the Jordan River west of Gad.

The men of Jabesh Gilead were independent thinkers. They refused to blindly adhere to the Israelite standard for unified, mutual aide, e.g., they didn’t join the Israelites’ slaughter of the Benjaminites over a murdered Levite concubine. Perhaps they reasons that the Levite did not really love or value his concubine; after all, he gave her to the wicked men of Gibeah in return for them not molesting him.

Because the men of Jabesh Gilead did not join the battle against Benjamin, the Israelites felt justified in killing all who lived there with the exception of 400 virgin women. These women were given to the Benjamites to rebuild their tribe.

Story Line: The next time, the Bible mentions Jabesh Gilead is about 300 years later. An Ammonite, Nahash, besieged the walled town. The men asked Nahash for terms of surrender. Nahash responded that he would make a treaty with them only if they allow him to gouge out their right eye. Gouging out the right eye would destroy the men’s military capability particularly the archers. The elders of Jabesh Gilead asked Nahash for seven days to contact their Israelite brothers. If the Israelite did not rescue them in seven days they would accept Nahash’s surrender terms. Given their history of refusing to stand with the Israelites over the matter of the murdered concubine, likely neither the Ammonites nor the men of Jabesh Gilead expected succor from the Israelites.

One town that Jabesh Gilead appealed to for aid was Gibeah in Benjamin. Possibly, Jabesh Gilead contacted Benjamin because 300 years earlier the women of Jabesh Gilead were given to the Benjaminites as wives. The newly crowned King Saul was at Gibeah. When he heard the plight of Jabesh Gilead, the spirit of God came upon Saul.  He rallied 330,000 soldiers and slaughtered the Ammonites.

Following Saul’s rescue of them, the Jabesh Gilead men developed deep loyalty to Saul. This loyalty was so deep-seated that they entered a fortified Philistine city at night and took the bodies of Saul and his sons from the town wall after the Philistines killed Saul and his sons in battle. The Bible used the word “valiant” to describe these actions by the men of Jabesh Gilead. Valiant is the same word that was used to describe Saul’s warriors whose hearts God had touched (1 Samuel 10:26).

Analysis of the Actions: After the Philistines killing Israel’s king, stealing the bodies of the king and his sons from a Philistine town took real courage. Possibly the men of Jabesh Gilead believed the Philistines wouldn’t know who took Saul’s body. More probably, they knew the Philistines would learn they had Saul’s bones; but, they simply didn’t care. Saul was their king. He gave them aid against the Ammonites when no other Israelite city or tribe stepped forward. King Saul saved their ability to function as warriors in the paramilitary environment where they lived.

Importantly, the men of Jabesh Gilead didn’t retrieve Saul’s body because they were loyal to the Israelite monarchy. If believing in a monarchy was their motivation for retrieving Saul’s body, they have accepted, rather than ignored, King David’s request for support after the death of Saul. No, their loyalty and actions were directed toward Saul, the man. After burying Saul, the men of Jabesh Gilead mourned his death for seven days. Seven days it the traditional amount of time that an Israelite mourned the death of a first degree relative, i.e., father, wife, child. 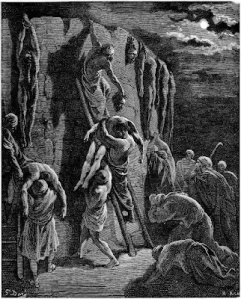 Independent thinking and loyalty were attributes of the men of Jabesh Gilead. We don’t know if their independent thinking allowed them to approve of all of Saul’s actions in his 40 years as king. We do know that they remained loyal to Saul despite his actions. This loyalty caused them to put their lives in danger to secure Saul’s remains and to bury them despite the might of the Philistine army.  Saul was not only their king; he was family.

Reflection: Does loyalty exist today to a leader or political leader. Are so loyal to any of these individuals that you would risk your lives for them.